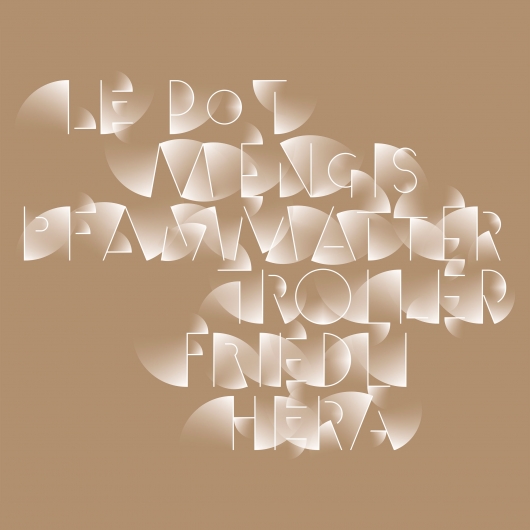 Open player in a new window →

All music by Le Pot except track 5, 9 and 11 by Benjamin Britten and track 3 by John Gay and Benjamin Britten
Recorded by Jean-Claude Pache at Burgkirche St.Romanus, Raron
Mixed and mastered by Willy Strehler at Klangdach
Graphic design by Urs Althaus

The church of St. Roman dominates the village of Raron like a hilltop castle. In defiance of the times it offers an intimate, peaceful and focused space. Le Pot with Manuel Mengis on the Trumpet, Hans‐Peter Pfammatter on the piano and keyboard, Lionel Friedli on the drums, and Manuel Troller on the guitar spent four days in this village church recording their latest album ‘Hera’. The choice of setting wasn’t random. Fragments from the music of Benjamin Britten serve as a starting point for Le Pot’s acoustic expedition: a melody from ‘Requiem aeternam’, themes from ‘The Beggar’s Opera’, a song from ‘A Midsummer Night’s Dream’. The sound is mystical, timeless and dreamlike, yet never esoteric or innocent. Rather, there’s a dark and sinister quality to Britten’s work. The gears crunch, they grind against each other and don’t quite mesh together. The tonal centre becomes more and more indistinct, gliding subtly from major to minor. “Music has the beauty of loneliness and pain”, the composer once remarked.

Le Pot use Britten’s melodies as a springboard for improvisation and launch themselves into capturing new territories. Hera? Heaven? Salvation? Perhaps. The band relentlessly thrusts open the church doors, allowing the worldly–avarice, anxiety, exuberance and lust–to infiltrate the spiritual. The melodies lose themselves, the rhythms change. Impressionistic sounds dissolve in the acid bath of a guitar or a blaring keyboard: they begin to flicker and flutter, forming themselves into sinister collages and lively tableaux vivants. Was that gunfire? A bold declaration of love? The caw of a crow? The power of the Le Pot’s imagination is immense yet never gets out of hand. Thanks to a conceptual framework outbursts are reined in and there is plenty room for spontaneity. At one point the 500 year old church bells can be heard–nine soft rings–before the band takes over.

The mystical acoustic ‘Hera’ is after the electrifying ‘She’ the second album of a trilogy that will culminate in ‘Zade’.

You can add items to the cart by clicking the "Add to Cart" button.

If you experience problems, please contact .(JavaScript must be enabled to view this email address)

The band Le Pot – comprised of Manuel Mengis on the trumpet, Hans-Peter Pfammatter on piano, synths and Moog, Manuel Troller on the guitar, and Lionel...
More about Le Pot →